The word “evangelical” was co-opted by many other groups; groups that did and do not accept the doctrines set forth in The Book of Concord and what was meant as a slur (“Lutheran”) eventually began a badge of honor and the name of those who accepted that The Book of Concord.

Dr. David Scaer wrote in his book, Getting Into the Book of Concord, (Concordia Publishing):

The first 30 years of Lutheranism (1517-46) are the history of the Lutheran survival in the face of threats from Roman Catholicism and then Reformed theology. The Lutherans were tempted either to go back to Rome or to go forward to join Zwingli, Calvin, and the Reformed. The second 30 years (1546-77) are the history of dissensions. Perhaps the threats of the second 30 years were more serious because now the enemies of Lutheranism called themselves “Lutheran” too.

The introduction to The Book of Concord states:

In conclusion, we repeat once again that we are not minded to manufacture anything new by this work of agreement or to depart in any way at all, either in content or formulation, from the divine truth that our pious forebears and we have acknowledged and confessed in the past, for our agreement is based on the prophetic and apostolic Scriptures and is comprehended in the three Creeds as well as in the Augsburg Confession, submitted in the year 1530 to Emperor Charles V, of kindest memory, in the Apology that followed it, and in the Smalcald Articles and the Large and Small Catechism of that highly enlightened man, Dr. Luther. On the contrary, we are minded by the grace of the Holy Spirit to abide and remain unanimously in this confession of faith and to regulate all religious controversies and their explanations according to it. (Emphasis added, Tappert Edition, p.13-14) 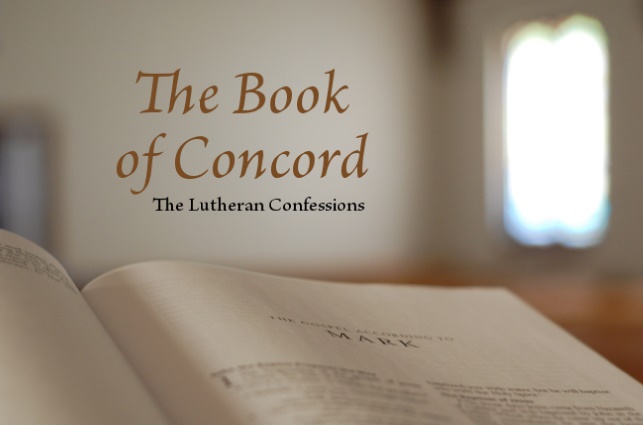 The creation of The Book of Concord temporarily united the evangelical who accepted the Bible’s teachings on the Articles of Faith. More than 8,000 pastors and rulers signed and adopted The Book of Concord. Unfortunately unity did not last.

As history moved on, the Lutheran Church became deeply divided. Various philosophies and religious movements were conflated with the Bible’s teaching and profoundly affected the
doctrine and practices of various groups, all of which used the name Lutheran. The name “Lutheran” no longer signified an single body of doctrine based on the Bible alone. So an adjective was added– confessional.

So What is a Confessional Lutheran?

A Confessional Lutheran is a person who willing teaches and abides by the doctrines set out in The Book of Concord and do so because the documents contained The Book of Concord are nothing more than an accurate exposition of the Bible’s teachings on the Articles of Christian Faith. Confessional Lutherans are people who do “not to depart from it at all, either in content or formulation, and to regulate all religious controversies and their explanations according to this divine truth that our pious forebears confessed.”