Seeking A Righteousness of Their Own

“Two men went up into the temple to pray, one a Pharisee and the other a tax collector. The Pharisee stood and was praying this to himself: ‘God, I thank You that I am not like other people: swindlers, unjust, adulterers, or even like this tax collector. I fast twice a week; I pay tithes of all that I get.’” Luke 18:10-12

You have probably noticed. Our political and cultural discourse and peoples’ disposition toward those with whom they disagree is becoming (and has become among some) down right caustic. Progressivism,[1] socialism,[2] and fascism[3] are increasing in popularity and political support. Political and social activists (along with office holders) are becoming more militant as they seek to rid our culture of common sense and the traditional (as well as the Christian) ethos that has produced “a more perfect union;” a union that was created to secured our rights of life, liberty, and the pursuit of happiness. Many commentators today cite the loss of civility as the principle problem in our country. While it is true that crude language and brash discourse by leaders on both sides of the aisle doesn’t help, the problem we face is much deeper and darker than the mere loss of mutual respect and manners.

What we are witnessing in this country (and in others) is the rise of a new class of political, philosophical, and religious zealots. A zealot is a person who is fanatical and uncompromising in their beliefs, goals, and methods. They often use threats, intimidation, and violence as tools in pursuit of their religious, political, or ideological beliefs.

While this description gets us closer to the heart of the problem, it does not yet get us to the heart of the matter. The root cause (as the left would say) of this rebirth of fascism and socialism, is old fashion self-righteousness. The problem is the human heart that is untamed by law, discipline, and humility. Jeremiah 17:9 says of the natural heart, “The heart is more deceitful than all else And is desperately sick; Who can understand it?”

Today’s progressive activists and the political and corporate class are in the process of refining “good and evil,” “right and wrong,” “sin and virtue,” and “righteousness and unrighteousness.” A person is deemed righteous in the eyes of the dominant culture if he/she believes what they believe and acts according in compliance with the emerging secular world view, with all its particular articles of faith (i.e. abortion, environmentalism, climate change, marriage and family, the multitude of gender identities, self-identification, “your truth” (subjectivism), political correctness, statism, egalitarianism, multi-culturalism, inclusivism, democratic socialism (which is still socialism), social justice, reparations, white privilege, racism (per the new definition), sexism, (per the new definition), materialism, scientism, rejection the assortments of manufactured cultural/psychological phobias (i.e. homophobia and Islamophobia), and the next ism to come along). These are the new tenets of modern religiosity. These are the beliefs and codes with which a person must comply if said person is to be considered clean and welcomed among the righteous class.

Good people accept these new norms and bad people, phobic people, and ignorant people resist them. Those who do not embrace these new codes of morality must be shunned, banished, boycotted, put out of political power, put out of business, denied their rights,[4] and punished by the government if they do not comply. To what end? So that the “good” person can stand at a distance and say to himself/herself (or to their gods), “I glad I am not like those him/her.  I am better. I do my part. I care more than he/she does.”  This is nothing other than old fashion self-righteousness.

Our present circumstance should not surprise the Christian. “Remember that there will be difficult times in the last days. People will be selfish, greedy, boastful, and conceited; they will be insulting, disobedient to their parents, ungrateful, and irreligious; they will be unkind, merciless, slanderers, violent, and fierce; they will hate the good; they will be treacherous, reckless, and swollen with pride; they will love pleasure rather than God; they will hold to the outward form of our religion, but reject its real power.” (2 Timothy 4:1-5) Romans 10:3 is more to the point. “For not knowing about God’s righteousness and seeking to establish their own, they did not subject themselves to the righteousness of God.”

As a pastor, who is by nature a sinner (the worst I know) and saint (by virtue of God’s grace and election through the water and the Word of Holy Baptism) I know a religion when I see one. The new morality and modernity is a religion. Its leaders are our modern day Pharisees, Sadducees, and Priests and foot soldiers the zealots for this new religion.  As for the “well intentioned,” but misguided people who buy into the required articles of faith (for they too want to be righteous), their sheep.

Like all religions of good deeds intended to produce its own version of righteousness, our current cultural religion is a religion of law. All religions of law only increase the number of laws to be obeyed. All of them also fail to produce that which they bind the followers to do, namely to fulfill the law and live a life of bondage. While promising utopia, bondage is what they deliver.

Self-righteousness drives out all humility. It drives out all love and kindness toward one’s neighbors when the neighbors are found to be unclean. It must remove the unclean from sight. This is what is happening in the streets, court rooms, state houses, and on capital hill. This is the new civic religion driven by zealots as they seek a righteousness of their own making.

Christians are to be different. We have a twofold duty. On the one hand, we are to hold faithfully to the articles of faith and tenets (including moral codes) of the Christian religion, as given through the prophets and the apostles, with Jesus Christ as the Chief Interpreter of Scripture. We are to be mindful of the moral laws of God has given in the Bible. We are to call sin by its proper name and remind all of the wages of sin (Romans 6:23). We are called to repent of our own sin and to tend to the logs in our own eyes first (and continually). Isaiah 64:6 “For all of us have become like one who is unclean, And all our righteous deeds are like a filthy garment; And all of us wither like a leaf, And our iniquities, like the wind, take us away.” Thus, the need for regular church attendance in a congregation that rightly administers the Word and Sacraments. 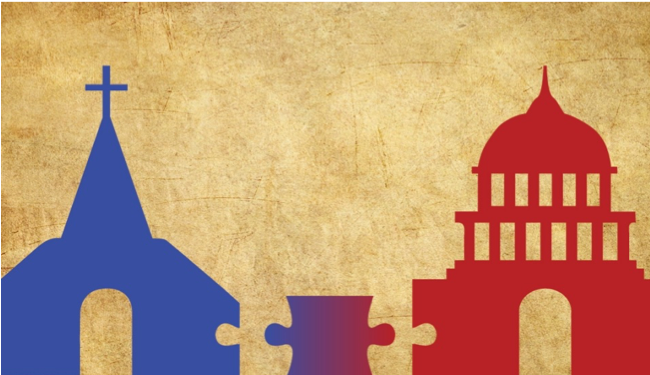 The link between the two is the Christian’s vocations.

At the same time we are called be kind, hospitable, compassionate, humble, gentle, patient, loving, and of service to our neighbors. Christians often find themselves in utter disagreement with family members, friends, and neighbors over the religions and vices of modernity. Yet, the practitioners and zealots of modern religions are people for whom Christ died too (the great equalizer!).  Christ’s life, atoning death and resurrection were not only for me, but they were for those who do not or no longer believe that which the Bible teaches concerning morality, the Law, and the Gospel of Jesus Christ.  Philippians 3:8-9 “More than that, I count all things to be loss in view of the surpassing value of knowing Christ Jesus my Lord, for whom I have suffered the loss of all things, and count them but rubbish so that I may gain Christ, and may be found in Him, not having a righteousness of my own derived from the Law, but that which is through faith in Christ, the righteousness which comes from God on the basis of faith.”

It should go without saying (but then many Christian truths have gone unlearned or have been forgotten and forsaken) that Christians are people who obey the laws of government, as long as those laws do not eclipse what God has given us to believe and do in His Word. Romans 13 teaches that we are to obey the laws of government. It also teaches that the laws of government are to be for our good. Romans 13:3 “For rulers are not a cause of fear for good behavior, but for evil. Do you want to have no fear of authority? Do what is good and you will have praise from the same; 4 for it is a minister of God to you for good. But if you do what is evil, be afraid; for it does not bear the sword for nothing; for it is a minister of God, an avenger who brings wrath on the one who practices evil.” At the same time we learn in Acts 5:29 that when commands of the civil authority cannot be obeyed without sin, we must obey God rather than men.

We live in difficult times and it will get worse for those who abide in God’s words. But the answer for the Christian (and all decent people) is not to copy the behaviors and attitudes of the secular zealots. We ought to conduct ourselves with humility and kindness toward our fellow citizens. We should resist the temptation of self-righteousness for we have a righteousness from above, a righteousness more glorious than anything human nature can produce. We have a righteousness given to us by Jesus Christ through the Church — it is “the righteousness which comes from God on the basis of faith.”

Seeking A Righteousness of Their Own